It is fifty years, this Saturday 20th July, since the world stood still and watched Neil Armstrong take ‘One small step for man, one giant leap for mankind,’ as he walked onto the moon. That’s why I was more than a little excited to sit in the same seat where he practiced his movements in the lunar module simulator at The Space and Rocket centre in Huntsville, Alabama. The story of NASA is spread across the United States and there are several places to soak up the story of space travel. I’ve gathered together the top stops in the US for space fans to celebrate the 50th anniversary this summer and to boldly go where few have gone before. 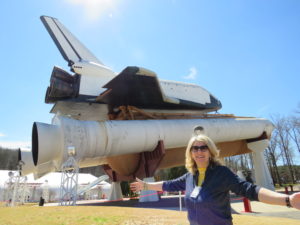 Huntsville is home to the first Space Camp, founded in 1982 which has since gone on to have five female astronauts on the list of alumni. Live like an astronaut at tranquillity base and experience first-hand the simulators used by the astronauts Neil Armstrong, Buzz Aldrin and Michael Collins. Attending a three-day adult Space Camp experience is $549 including food, experiences and accommodation. https://spacecamp.com/

AKA Rocket City, Huntsville is the earliest home of NASA and the pioneering scientist Wernher Von Braun who worked here to make the initial rockets that sent man to the moon. He’s a big hero in this town and you will find a beer named after him locally at the Straight to Ale Brewery – a brown ale of course! 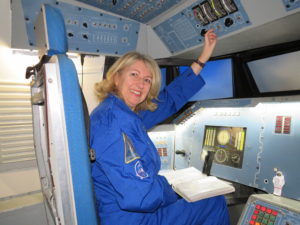 Rocket City is getting ready to Party Like It’s 1969! #Apollo50  and will be toasting Apollo workers and moonwalkers, and leading a rocket launch as part of its celebrations. Throughout 2019, plans to commemorate the Apollo 11 anniversary events and Alabama’s Bicentennial are underway, highlighted by Panoply 2019’s Alabama Bicentennial and Lunar Landing themes, a Guinness World record attempt at the most simultaneous rocket launches, an Apollo Homecoming Dinner at the US Space & Rocket Centre and dancing in the streets on Courthouse Square. The Apollo 11 mission anniversary week in July 2019 also includes a Celebration Car Show, and a concert on July 20th, moon landing day. www.rocketcenter.com/apollo50 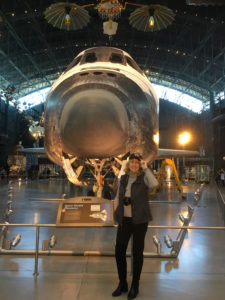 If you are flying into Dulles International Airport in the state of Virginia this summer and have a few hours to spare before your connection to another destination, you may have time to visit The Stephen Udvar Hazy Museum, and with a free shuttle service from Dulles airport entrance is also free. The space shuttle Discovery is in situ here with a vast array of iconic aircraft including an Air France Concorde and the original Anola Gay aircraft. It has a spectacular viewing centre of Virginia from the tower with shows and workshops for all the family. https://airandspace.si.edu/udvar-hazy-center

For those staying in Washington DC then the Air and Space museum has a spectacular exhibition running this year https://airandspace.si.edu/ The Museum in Washington, DC, plans to mark the historic occasion by displaying Neil Armstrong’s spacesuit—made possible through our Kickstarter campaign Reboot the Suit.

We will mark the 50th anniversary of the Apollo 11 mission with a five-day celebration centred on the National Mall in Washington, DC.

Visitors can learn about lunar science of the past and present and walk the path the Apollo 11 astronauts did on the Moon.

We will celebrate the exact moment the first steps were taken on the Moon with an evening of activities until 2:00 am.

Go on site at NASA Johnson Space Centre and get a behind-the-scenes look at human space exploration. Tour astronaut training facilities, Mission Control and discover what it takes to travel to Mars. The Tram Tours takes visitors to Mission Control, the historic room that brought Apollo 13 back home. The Starship Gallery Museum is a must see for all space fanatics looking back at the 50 year history of space travel since the moon landing.

Space Centre Houston celebrates all things Apollo 11 this summer – especially from the anniversary of the blastoff on July 16 through the mission’s conclusion when the astronauts safely splashed down back on Earth on July 24.

Live at Space Centre Houston Celebration is an all-day and evening celebration of the 50th anniversary of Apollo 11 landing on the Moon and the first steps on the Moon. Events include Special Panel Presentations featuring Apollo-era flight controllers, Book Signings and a public countdown led from the stage to Neil Armstrong’s first steps on the Moon at 9:56p.m. https://spacecenter.org/apollo-50/apollo-anniversary-celebration/

Join the visitor complex in celebrating the 50th anniversary of NASA’s Apollo Program with a 2-day admission pass. This pass is good for 2 park entries within 14 days of the first use. Keep an eye out for Apollo celebrations this summer!

The Museum of Flight, Seattle is host to The Smithsonian’s Destination Moon exhibition from April 13th –September 2nd, 2019 in its only west coast appearance. The exhibition is enhanced with The Museum of Flight’s own Space Race displays with rare objects such as a Soviet Sputnik satellite, early cosmonaut spacesuit and the world’s only display of the remains of the rocket engines that boosted Apollo missions to the Moon. Also unique is a gallery about the legacy of Seattle-area industry, astronauts and engineers to the space program.

Choose the Destination Moon add-on during checkout when purchasing tickets to The Museum of Flight – costs $10 for adults and children.

Family experiences include spaceflight interactive displays and an indoor playground with a full-scale, hands-on command module.