Nobody wants to come home from their holiday, especially not if a long haul flight is involved. But there are ways to soften the return trip. I booked our flights online through Abu Dhabi on Etihad Airlines, and made substantial savings by taking connections with a long delay in between. It’s understandable why people are put off the idea, especially if travelling with kids. But there are benefits. A rest between two long haul flights helps adjust to the time at home and ultimately eases jet lag. The bonus is the chance for a mini holiday en route.
I was travelling with my friend and our two young daughters, with sixteen hours in Abu Dhabi we got a taste of middle-eastern hospitality. Abu Dhabi is a newly built city, shiny and well laid out without the constraints of old infrastructures. The city is divided into seven distinct islands and because we were travelling with an 11 and 13 year old, we headed straight to Yas Island. Yas is an oasis for little kids and big ones who are fans of fast boats and Formula One motorcars. We checked-in at midday to the Viceroy Hotel which peered above the motorway like a modern sculpture. This marvel of architecture straddles across the Formula One Grand Prix Racetrack and nestles cosily next to the luxurious yachts in Yas Marina. The observant kids were quick to recognise the patterns of the race circuit in the building’s design and decoration. After depositing our bags in a generously spacious suite with two bathrooms, we took the girls and ourselves up to the ninth floor for a refreshing swim, a treat after our six hour flight. The Viceroy caters for all with a family friendly pool and an adult only pool on the other side of the hotel. We imagined what it must be like on race days with the roar of the engines zipping around the track. It was a Saturday and the hotel hosts family events and entertainment in the grounds attracting locals to the hotel. The Viceroy has a beautiful spa which carries the ESPA range − a calm and tranquil spot in the middle of so much other activity. There are six restaurants to choose from and all lined up with great views of the race track. But we had a full day in this sunny capital and we couldn’t leave without visiting The Grand Mosque which is also the biggest in the world. Only a twenty minute taxi ride from Yas Hotel, it is one of those pieces of architecture that leaves the kids in awe and the parents glad that they slipped some culture into the trip. After our return we gave the girls the option of beach or shopping the later won out. The Yas Mall is the second largest in the UAE and located beside the theme part, Ferrari World. A free shuttle bus leaves the hotel every 38 minutes, bringing guests from the Viceroy to the Mall, Beach and Waterworldtheme park so it is possible to spend a day on Yas without changing money into the local currency as all the amenities, shops and restaurants take credit cards Ferrari World is a dream for little boys and girls who love cars but it is more than that, it boasts the world’s largest indoor roller coaster and fastest roller coaster. It’s located only a short stroll across a bridge from shopping heaven at Yas Mall so we popped in for some thrills before shopping. To get the best value for this park spend a full day. My daughter approved of the choice of stores and we hurried along to one of her favourites, Bath and Body Works, for those couple of presents that she had forgotten to buy. Every imaginable taste is catered for in the variety of restaurants from Italian, American diner food, Japanese but we opted to hop back on the bus and dine at our hotel. The Noodle Box at The Viceroy Hotel has a wonderful menu for children. Our kids love Chinese food and with prawn crackers and mocktails to start the kids wanted everything on the menu. Our waiter Tung from Vietnam took great care to provide dishes that weren’t even on the menu. The mums opted for noodles and seafood while the kids had their favourite savoury rice with beef. Three of the hotel restaurants have recently won international awards and everything about this hotel exudes excellence and great attention to detail. I had popped into the Japanese restaurant earlier and the buffet presentation was a work of art. Delicious sorbets in real fruit skins rested in frozen bowls of ice with edible flowers frozen into the design.

So was it worth stopping off? When booking our flights there was a saving of over €100pp by taking the long stopover. The cost of a hotel room at the Viceroy was half that and the luxuriously large ESPA toiletries in the bathroom would cost this in a Dublin Spa. The stopover was especially exciting for the kids so yes, we hope to return to Abu Dhabi someday soon.
Factbox
For more information see www.visitabudhabi.ae
The Yas Viceroy Hotel
Yas Viceroy Abu Dhabi is the only hotel in the world suspended over a Formula 1 racetrack
Rooms start from €185 EUR (AED749) per night (incl. tax). To book visit http://www.viceroyhotelsandresorts.com/en/abudhabi
We booked flights with Etravel www.e-travel.ie
Tel: 01 4081999
100% Irish owned & bonded Travel Agency.
New record-breaking rollercoaster at Ferrari World Abu Dhabi
The world’s largest indoor theme park, Ferrari World Abu Dhabi, which is already home to the world’s fastest rollercoaster, Formula Rossa, and now the record-breaking ‘Flying Aces’ ride www.ferrariworldabudhabi.com
Prices: Adult full day ticket €84 Child €74
Published in Irish Mail on Sunday 29th May 2016 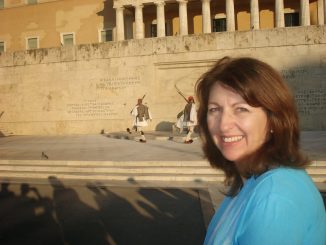 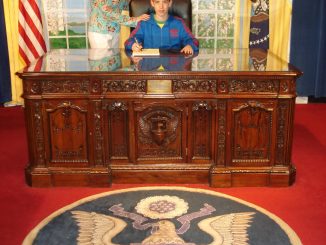 On the history beat in Washington DC or Desperately Seeking Obama! 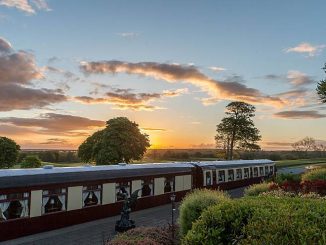 Our stay at Glenlo Abbey Hotel took us somewhere special.