I’m continuing my quest for the best destinations around the country in the run up to Christmas and have returned to one of my favourites. Belfast is buzzing with atmosphere and things to do for arts and food lovers – especially if you fancy a visit to the Christmas Markets. 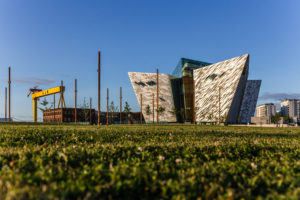 A first for me on this trip is an overnight at the Titanic Hotel which is a stunning renovation of the original Harland and Wolff drawing offices and only across the road from The Titanic Experience. I’ve brought along my pal Rachel as we’re both music lovers and have tickets to see Villagers at the Sound of Belfast Festival. 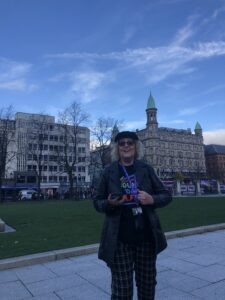 Belfast was awarded UNESCO City of Music just over a year ago so we start our odyssey with Dolores of Creative Tours who we meet at The Ulster Hall. This is where Rory Gallagher played on his annual tour up north making an important gesture while many other artists avoided Belfast during the troubles. He wasn’t the only great artist as many down over the years have graced the stage. From Handel to Van Morrison every taste has been catered for. My particular favourite story is that Led Zeppelin performed the entire Led Zeppelin IV album here – little did the audience know that they were listening to one of the most seminal collections of the 1970s. Ruby Murray was a local girl who also played the Ulster Hall – a darling of the UK charts in the 1950s with over ten hits. Her name has been etched into the annals of Cockney Rhyming slang by none other than Del Boy in Only Fools and Horses. 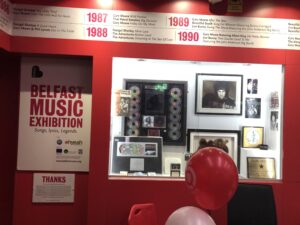 The enthusiasm Dolores brings to the tour kept us enthralled for three hours and we finished up at a private performance of Clara Tracey at the Oh Yeah Centre. This talented artist plays the piano to accompany her distinctive hauntingly sweet voice – I had the sense we were watching a new Tori Amos or Kate Bush in action. The centre has some fab memorabilia from the punk days when The Undertones and Horslips played Belfast. 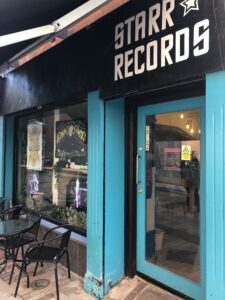 For dinner we enjoyed Tapas at Buba, one of the great eateries in St Anne’s Square. The signature cocktail of the day is highly recommended. Other restaurants in the square cater for Asian food and Italian food, there’s a venue to suit all tastes. This trendy part of the city is the Cathedral Quarter and we did stop by some cool bars such as The Dirty Onion and the Harp Bar which all seem to do live music and the atmosphere goes on from the afternoons until late at night. 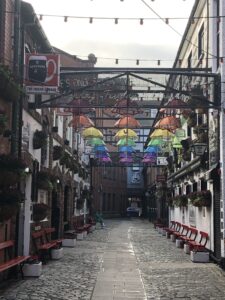 Also in St Annes Square is the MAC theatre where we watched Villagers who were playing an acoustic gig. It was one of the most intimate and soulful concerts I’ve been to in a long time and it’s great to see music back with gusto across the city. The fact that Belfast opened up to hospitality sooner than the south has done a great service in highlighting its many attractions to a new era of visitors from the south. 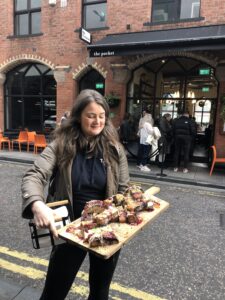 The MAC has more than one theatre and is filled with lovely art exhibition space and a café with delicious fayre. We sampled their artisan toastie next day on the Taste and Tours 5 Stop Brunch with guide Sarah Jones. Rachel and I didn’t know what to expect when we met at the Jaffa Memorial on Victoria Street and we were a little tender after our fun the night before. First stop was The Pocket which is nestled in the middle of Belfast’s very own Flatiron building and next to Bittles Pub. The Pocket is well regarded for its variety of coffees but the French Toast is a speciality with drizzling jam, pistachios and crunchy goodness. 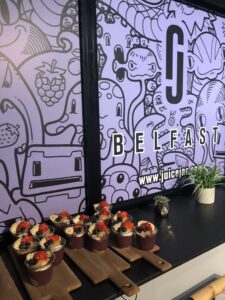 Next stop was at the Juice Jar where we savoured healthy smoothies topped with bananas, strawberries and blueberries – the ginger shot is recommended for reviving the body on a Sunday morning. We were given a mixology lesson at Berts Jazz Bar next and finished up at The National on High Street with a mini fry on a stick. Sarah has a wealth of knowledge about the history of Belfast and although the tours end in December they start back mid-January so that’s another excuse to visit Belfast. A voucher for Taste & Tour is a nice idea for a Christmas Gift too and with three cocktails included it is good value at £65 https://tasteandtour.co.uk/ 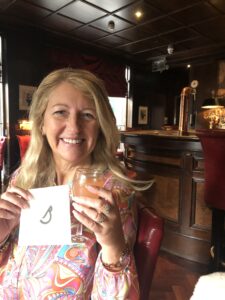 Santa is coming to Belfast this month too and will show up at the Titanic Experience from November 23rd until December 23rd enhancing a great day trip to Belfast for families. With new galleries and updates The Titanic Museum is worth visiting again and again but don’t leave without seeing the SS Nomadic. This tender to RMS Titanic brought first class passengers from the port of Cherbourg in April 1912 and has had a chequered career involving participation in World War II before ending up as a party boat on the River Seine. It’s a unique experience to step on board and walk in the footsteps of history and a credit to the Titanic Quarter and the constant upgrade of the area. https://www.titanicbelfast.com/explore/ss-nomadic/ 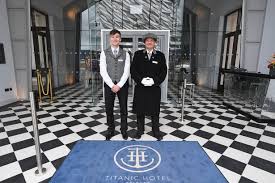 After a packed two days Rachel and I felt like we had been away for week. We took the train back home to Connolly Station on the Enterprise. The food served in the first class carriage was delicious and for only €12 there was enough for two people, with wine on the menu. The quiet hum of the carriages on the tracks and comfy seats on the enterprise deserve a mention – as do the lovely taxi drivers. You can be sure of a warm welcome with lots to do in Belfast. 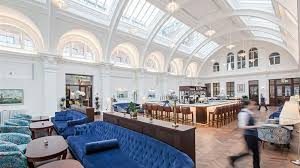 For all you need to know about Belfast see www.visitbelfast.com

To find what’s going on at the MAC see www.themaclive.com

Stay at The Titanic Hotel this winter from £159 per room with breakfast for the midweek sail! www.titanichotelbelfast.com