It’s that time of year when travel junkies start to think of Christmas Markets and I’ve already done the hard work and found the perfect destination. Nuremberg has one of the oldest markets in Germany and the perfect size to explore and enjoy some extra sightseeing. With Click and Go you can have a cheap weekend away and enjoy the festive atmosphere this December for three nights from only €274. https://www.clickandgo.com/

Take a read of my article from the Irish Mail on Sunday which was published this summer and I hope that you enjoy Nuremburg too. 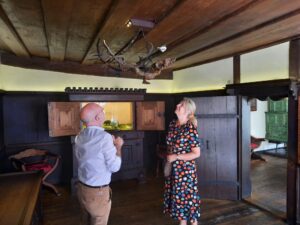 One of the best attractions for art lovers in Nuremburg is Durer’s House. I was ten years old when I first saw a print of Albrecht Durer’s Praying Hands resting on the mantelpiece in my Granny’s house. The meticulous study of two hands joined gracefully together intrigued and inspired me. I practiced drawing them hundreds of times and it probably had something to do with my passion for art and the fact that I pursued my further education in Art College. Standing in the artist’s house in the old town of Nuremberg I’m equally as moved by the precision of Durer’s skillful ability at a time when art was in a Renaissance. It’s easy to imagine Durer printing his etchings as my other half and I pad through his workshop with all the original equipment in situ. 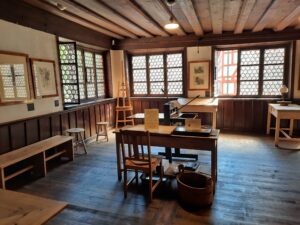 Durer was one of the first superstars of art, perfecting use of the printing press to disperse his work to the masses and accumulating a vast amount of wealth in the process. His house was remarkably one of the few buildings left standing after the Second World War.

The symbolism of Durer’s peaceful hands is more than poignant, as I’m in a city with a legacy laced with uncomfortable memories. Being at the heart of the Third Reich, Nuremberg’s citizens saw the destruction of 90% of their city during the war. The old town was rebuilt in the 1950s with great attention to detail close to its original layout and design, making it a charming destination to visit now and authentically medieval.

Nuremberg held an important position in the middle ages as a seat of the Holy Roman Empire – dominated by an impressive Medieval Castle, where emperors stayed while in the city. The city walls are in good condition with 71 towers still intact. We took time to roam the beautiful gardens and vantage points which are free to explore. The weather was balmy in June and perfect for sitting under the gaze of the castle in one of the bars with a glass of the local red beer. 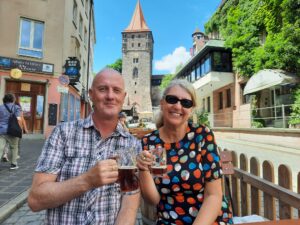 Nuremberg’s location and Nazi history made it the natural choice for hosting the trials of Göring and other criminals after 1945. In court 600, the evidence was trashed out against the twenty-one Nazis that were brought to trial for the part they played in the murder and unethical medical experimentation on the Jewish population and other victims of the holocaust. 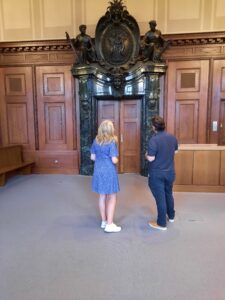 The accounts of the trial with photographs and film portray the horror in stark realism making it difficult to comprehend how one human can torture another is such a manner. But the exhibition of this dark period in European History is more important than ever to revisit and comprehend so that it must never happen again. Afterwards the Nuremberg Code was written and has its seventy-fifth anniversary this year. This important ethical declaration of human rights is a recommended standard to be used by medical persons and there has never been a better time to revisit its relevance. Courtroom 600 remains open to visitors and is an eerie must see for all history buffs. 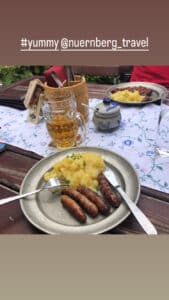 On a lighter note there are sausages and then there is the famed Nuremberg Sausage. Usually accompanied with sauerkraut or potato the Nuremberg Sausage is served in generous portion sizes of 6, 8, 10 or 12 . The sausage has strict criteria to meet and must be between 7 and 9 cm in length and weigh between 20 to 25 grams. According to legend the size ensured that it was easy to fit through the keyholes of medieval doors after the city gates had been closed at night or after the inns had closed to placate drunken revellers. It’s probably more likely that due to the high quality and cost of producing the sausage butchers could charge more by making them smaller. For lunch we discovered one of the most famous traditional restaurants, The Golden Stern, which offers the sausages with lashings of delicious local brew and is good value at €15 per person. 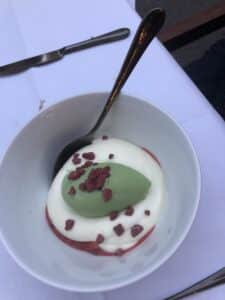 Not to be outdone, modern Frankonian Cuisine is in a renaissance in Nuremberg. Fraenkness is probably one the best restaurants I’ve visited in Germany, with a unique twist on modern cooking. My taste-buds danced dining on my duck main course as each mouthful offered more delicious flavours that I found impossible to identify. As for my other half, he’s been raving about the prawn soup since our return to anyone willing to listen to his epiphany. https://fraenkness.de/ 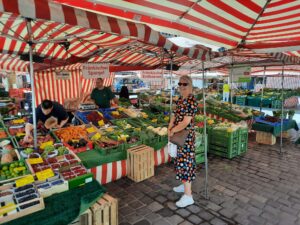 The Market Square is a bustling centre for local farmers to sell their produce during the week. In the north-west corner stands the Beautiful Fountain which offers the opportunity to have a wish granted. Standing 19 meters high this metal monument is over 500 years old and due to careful protection survived two world wars. We were told to find the golden ring in the iron railings and turn it three times while making our wish. It takes some navigation but the memorial is a unique and quirky attraction. We arrived at the square just before midday and in time to witness a charming procession of figures emerge from the medieval clock tower of Frauenkiche. In the background a Glockenspiel provided music as those of us below watched up in wonder at this achievement of medieval engineering. 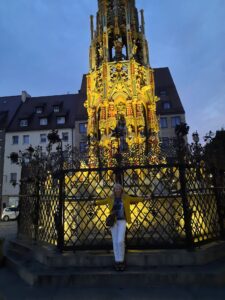 The German National Museum hosts an array of precision instruments from the early middle ages and fine samples of art. The artists Cranach and Rembrandt adorn the walls. One of the most fascinating artifacts is an early globe made in 1492 and painted without showing the Americas, as Columbus had yet to make his discovery. This large museum houses a vast amount of costumes, hunting equipment and even dolls houses which were used to train the young ladies in keeping house. However toys are an important draw to Nuremberg as it is home to many brands including Playmobil. A thirty minute train ride from the centre of the city is the Playmobil Fun Park and a must if travelling in the region with little ones. Tickets must be purchased online. https://www.playmobil-funpark.de/en/

The Toy Museum in the old town displays vintage toys making a fascinating visit for all ages. https://museums.nuernberg.de/toy-museum 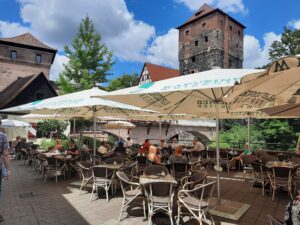 As we wander over the many bridges that weave across the River Pegnitz the old town enjoys an easier pace of life than other German cities. Many delightful bars and shops draw our attention along the way but we must stop when we come to the Gingerbread Shop which offers Nuremberg Lebkuchen – another local delicacy. The Gingerbread is as famous as the sausage and makes a delicious treat infused with cinnamon, nutmeg, ginger and all the traditional smells of Christmas. Indeed Nuremberg comes alive for the month of December and boasts the original and best Christmas Market in Germany. The legend of the Christkind is alive and well, as biannually a pretty girl is chosen from the city to be the symbol of The Holy Christ who brings children their gifts on December 24th. Originally this tradition was put in place by Martin Luther in the sixteenth century who chose the symbol of the Christkind to replace the catholic saint St Nicholas. 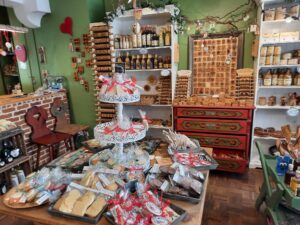 A lovely way to end our weekend is hearing about the peaceful message of love and hope that is told every Christmas in the market square. It sums up what we witnessed during our stay in this town with many stories to be told and remembered, justified and healed. The memories of our lovely visit will remain etched in my mind and endure like the lasting image of Durer’s Praying Hands. The Gingerbread however didn’t last so long and was devoured before landing back in Dublin after our short two hour flight.

Highlight The airport is compact and easy to get through. Expect the usual well connected underground system that is found running from German airports that not only is cheap but easy to navigate. Direct Flights daily from Dublin with Ryanair.

Highlight The Nuremberg card is inexpensive and includes all your travel on trains and buses around the city and free entry into many sights and museums. Cost is €33 for 48 hour period.

Factbox Visit the Christmas Markets at Nuremberg this winter www.ClickandGo.com have a special offer. Three nights staying at the Ringhotel Loews Merkur on December 11th including flights from Dublin only €274 pps.

For more about Nuremberg visit www.tourismus.nuernberg.de/en/