Looking for some novel travel or something new to read? I’ve been meaning to get to Listowel for some time and I look forward to the return of Writer’s Week in 3D. In the meantime it has just been announced that there is the exciting rise of a new generation of Irish novelists – reflected in the shortlist for the 2021 Kerry Group Irish Novel of the Year Award which is revealed today.

Two first-time novelists are among the five writers shortlisted for the prestigious award – one of the most sought-after accolades in Irish writing, with a shared prize fund of €17,000.

More than 50 novels were submitted for this year’s award and adjudicators Rachel Cusk and Richard Skinner were given the arduous task of whittling these down to a shortlist of five on behalf of Listowel Writers’ Week.

The strength of Irish fiction writing is reflected in the submitted works, with established names competing with the younger brigade for the €15,000 prize for the overall winner. The five shortlisted novels are: 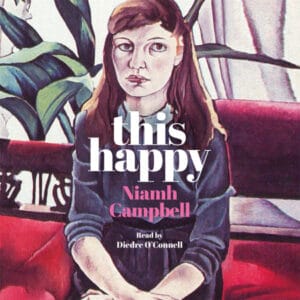 ‘This Happy’ by Niamh Campbell

‘A Sabbatical in Leipzig’ by Adrian Duncan

‘Words to Shape my Name’ by Laura McKenna

Speaking about the adjudication process, author Richard Skinner said: “We judges were thrilled to see the variety and quality of this year’s entries for the Kerry Group Irish Novel of the Year Prize. There were many novels that impressed us but we feel these five shortlisted novels were the standouts this year for the experiment and playfulness they showed towards form and for their unique statements. Each one contained great beauty and originality – a rare combination these days.”

Announcing the shortlist, Catherine Moylan, Chairperson of Listowel Writers’ Week,stated: “Listowel Writers’ Week has always been a festival where emerging writers are encouraged and welcomed. It is wonderful to see two debut novelists (Niamh Campbell and Laura McKenna) amongst this year’s shortlist. We are delighted to be able to continue to celebrate Irish literature and as always, we are most grateful to our sponsors, Kerry Group, for helping us continue this important literary award.”

The overall winner of the €15,000 prize will be announced on Wednesday, June 2, 2021.Speaking of their sponsorship, now in its 26th year, Kerry Group’s Vice President Corporate Affairs and Communications, Catherine Keogh said: “We are delighted to continue our support of Listowel Writer’s Week. In the last year the role and value of books has never been more appreciated as writers bring us to new worlds and new experiences while our own movement has been so curtailed. Congratulations to all of the authors who have been shortlisted and I very much look forward to hearing who will be announced the winner in June.”

The fulllist of competition winners at Listowel Writers’ Week will be announced on June 2nd on www.writersweek.ie