I’m standing behind a barricade on Dauphin Street and all that matters to me at this moment is getting my hands on as many strings of brightly coloured beads as I can carry around my neck. My pockets are stuffed with Moonpies and I’m wearing my new must-have accessory, a felt crown. This can only mean one thing – I’ve gone completely insane…or I’m under that elusive spell woven by Mardi Gras. 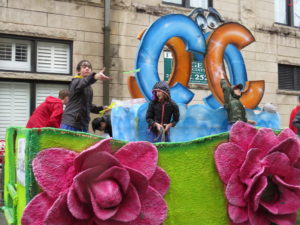 The origins of Carnival, as it is called in Europe, is taken from the latin translation of ‘Without Meat’ and heralds the festival of feasting on the last of winter food before the Lenten season begins on Ash Wednesday when luxuries are forbidden. Mystic societies have always been a part of the festivities and unification of people in all communities to behave badly and to party hard. What is apparent whether observing carnival in Cologne or Rio the festival of Mardi Gras, meaning Fat Tuesday, is steeped in fun and debauchery. 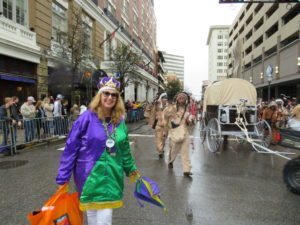 I’m visiting the oldest and original American ‘Mardi Gras’, in Mobile Alabama. Established in 1703 by Jean-Baptiste de la Croix, Bishop of Quebec, the locals are keen to emphasise that their Mardi Gras was founded several years earlier than that of their neighbours, 150 miles away in New Orleans . The Flower Parade is for kids big and small and I’m happy to join in the frenzy of catching beads and moon pies as they fly from the elaborately coloured floats. Imagine St Patricks Day with a parade twice or more times a day for two weeks and you’ve some idea of what Mobile is like during the two weeks of Mardi Gras. Floats belonging to the big mystic societies, or Crewes as they are known locally, carry Egyptian gods, dragons, jesters and magical animals, others are less elaborate with a motor cyclist and his dog.

Mardi Gras in Mobile is an industry employing 11% of the city population, in one form or another all year around. Party season begins in November as it does in Europe but the bigger balls start on January 6th and they run all the way to Fat Tuesday.

Until I step onto Dauphin Street I’ve no idea of the clockwork organisation needed to operate this mega festival. Ladies you won’t be expected to flash your bra or more as the floats pass by to grasp at a string of beads as you may in New Orleans. Twenty two parades at various times of the day line the streets over the two week period leading to Fat Tuesday. 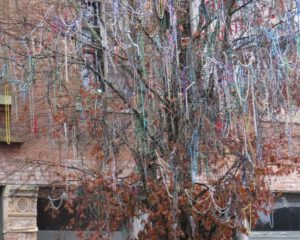 With the alcohol free zones and a wide range of family activities, Mobile is a safe place to bring the children. There are plenty of bars open with revellers too and beads hang from the railings as well as the trees. 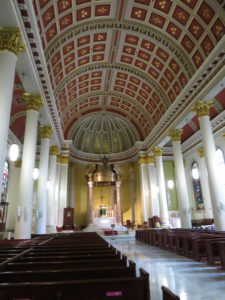 Filled with symbolism the glistening beads come in all colours and sizes, gold and purple with hearts, fleur de lis and shamrocks. The emblems of original colonists show the Irish and French influence in the region with Catholicism and Creole food – symbols also found on the ceiling of the Cathedral of Mobile.

With 77 mystic societies, some organise their own ball and have their own king and queen. One of these is the Crew of Columbus founded in 1922. They host their annual ball in the civic centre where 5,500 guests meet those who partake in the parade. Everyone in a society pays their own way and the events are entirely self funded – tickets are much sought after but available to the visitor. Most local people spend several hundred dollars each year on their Mardi Gras participation and some run into thousands.

The other societies have various names some comic other refer to their occupation – such as ‘the strikers’, one of the oldest orders who used to mark the cotton bales. I’m kindly invited to the ‘Order of the Dragon’s Ball’ by Stephen Dinkins, the event organiser. 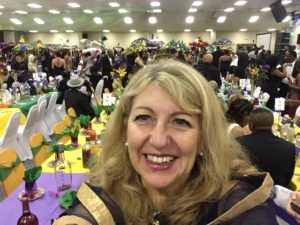 “Wer’all pleased ye’all could come,” and I’m pleased too because it’s wonderful to be in a room where the entire population have rhythm and can dance – the music is live with a mix of dance and soul classics. I get on the dance floor and try keep up with the hundreds of revellers dancing the famous Strut, this involves a procession of ladies carrying decorated umbrellas.

It symbolises what Mardi Gras is about – having fun as an anonymous person but part of a much bigger body or community. Everyone wants to belong to something and what better way to do this than with fun, food, dance and of course cocktails! 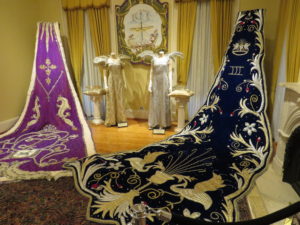 Next morning I’m ready to get under the skin of Mardi Gras and take a tour of the carnival museum. Craig Roberts has written a book about Mardi Gras, with more knowledge on the subject than anyone in Mobile. He describes the inauguration of the kings and queens each year who gain the right to their status by various community and philanthropic achievements. He guides me through to Jo Cain’s graveside who is the Mobilean credited with reviving the Mardi Gras after the end of the civil war. 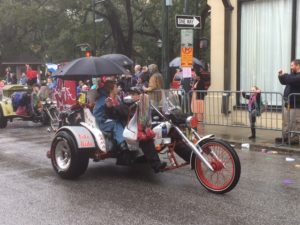 Before the war, Mobile was the richest city in the south and this changed dramatically after but Mardi Gras has been a staple of the community thanks to crazy traditions that Cain and his revellers established. Jo Cain dressed as a Chickasaw Indian – a tribe indigenous to this region and christened himself Chief Salacabamorinico − he’s the most popular character to impersonate today. His life as a reveller was colourful to say the least and the arrival of 22 widows to his graveside still causes consternations to this day with a re-enactment at Church Street Graveyard, when his mistresses arrive in red the farce begins. 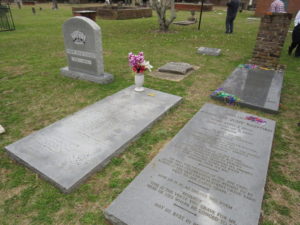 I’m curious and make my way to Jo Cain’s house on the morning of his parade, held on the Sunday before Fat Tuesday. The widows leave his house together, but not until they’ve thrown beads and moon pies to those at the gate, while a saxophone serenades the crowd. 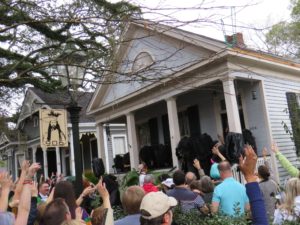 Anyone can march in the Jo Cain parade as long as you wear a pin and provide plenty of beads and Moon pies, a delicacy similar to Kimberly biscuits with banana or chocolate flavour fondant. I’ve managed to hang on to my crown and don a colourful costume in gold, purple the original colours of Mardi Gras and of course the royal court. Even the grey skies and sprinkle of rain doesn’t dull the mood. It’s just as invigorating to be throwing goodies as receiving and we end our tour at the iconic Battle House Hotel which is aptly on Royal Street. 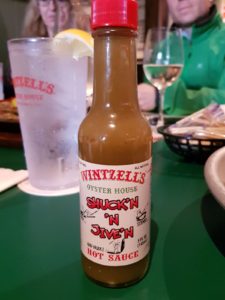 I’m followed in line by one of the modern day members of his crew wearing handmade Indian costumes and throwing hand made beads made with painted oyster shells. On the matter of oyster shells mobile has some of the best seafood in the region and stocks are strong of shrimp and other shell fish. The best place to enjoy these are at Wintzells Oyster House and you will have to queue during Mardi Gras season but a table is easy to order the rest of the year. The cocktails are a treat too and for breakfast beignets are the order of the day. Cuisine has a distinctly French flavour similar to that found in Québec. 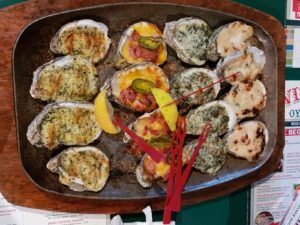 There’s much more to Alabama year round with the civil rights stories in the towns of Birmingham, Montgomery and Selma. For fans of literature a trip to Monroeville won’t disappoint as the original courthouse still stands in the town that was used in the movie ‘To kill a mocking bird’. The museum also pays homage to Harper Lee’s pal Truman Capote. Down on the gulf coast it’s a short hop over to Florida and the Florabama bar plays live music everyday of the week – being on the border of the two states they host interesting fish throwing competitions over the county line in summer. You never know who you might bump into and remember ‘Life is like a box of chocolates’ as one of the states favourite son’s said. The Deep South provides food for thought for a different type of American odyssey with good ol’ Sweet Home Alabama flavouring.

For more info check out http://www.mobile.org/ 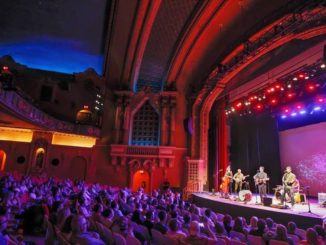 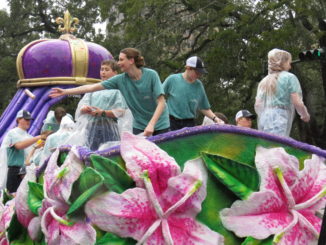 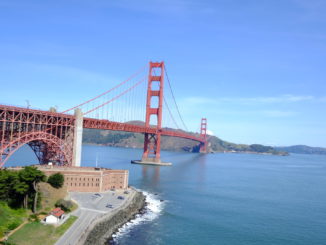