Costa Adeje proved to be the perfect destination for a Winter Sun Break in Tenerife. Riu Hotels offer several hotels across the Canary Islands. For more about our star gazing 4* holiday read on…..Escape this February from €988pps from Dublin 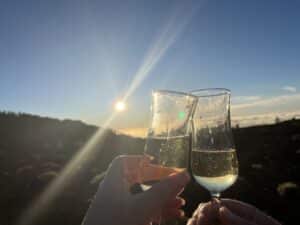 Staring up at the night sky the constellation Orion has never appeared clearer or bigger or so magnificent. And with a couple of glasses of champagne to kick off the evening as we watched the sunset, myself and the other half were feeling rather warm inside.  One of the best views of the celestial realms is found on the slopes of Mount Teide, rising up to 3,715 meters making it the highest point in Spanish territory. Teide National Park is a highlight of any visit to Tenerife, the largest of the Canary Islands, and being only 100 Km from the African coast and close to the Tropic of Cancer it offers a sub-tropical climate year round. 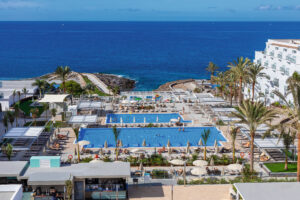 However our Four Star Adventure to Tenerife didn’t start there. It began at the Hotel Riu Buenavista on the stunning coastline of Costa Adeje. The appeal of all inclusive resorts is growing in popularity for a variety of reasons – most notably budget and value. I’ve stayed at Riu Hotels before and they cater exceptionally well for all demographics, couples, families and those with mobility issues in particular and although the Costa Adeje has a gradual slope to the sea the accessibility at the Riu Beuenavista is well designed to make wheelchair and buggy travel easy. The Beunavista has had a major overhaul during lockdown and boasts modern comfortable styling in rooms and throughout the public spaces. 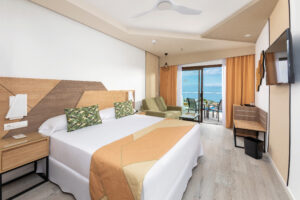 As well as the buffet options, speciality restaurants include Asian Fusion at the Mandalay restaurant and the best of Italian cuisine at Dolce Vita. We returned to the Atlantico Buffet everyday for Breakfast and Lunch with unspoilt views of the Atlantic Ocean changing from turquoise to cobalt as it crashed against the cliff below. 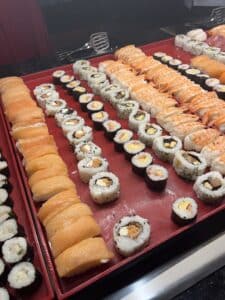 We enjoyed the same view from our bedroom with a balcony making it one of the spots that we enjoyed sundowners from our mini bar that was filled daily. Cocktails and Prosecco are included in the package making it very easy to feel spoiled in whichever bar we decided to watch the sunset. 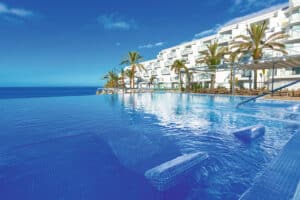 The sand in Tenerife is a graphite black colour formed from the solidified lava cliffs that line Costa Adeje and hug the coastline up to the impressive Los Gigantes about twenty minutes drive away. This landmark geological feature is just as awe inspiring as the Cliffs of Moher and home to a popular resort with plenty of traditional Canarian Architecture. The black sand didn’t put us off enjoying our local beach at Playa Paraiso each morning and we didn’t have to get up extra early to find a sunbed for the day. The Beunavista seems to have more sunbeds than guests so whichever of the four pools we decided to lie by there were always plenty available. I spoke to the manager Diego who confirmed that at Riu everything is done to make our holiday relaxing and easy to avoid stress or queues. 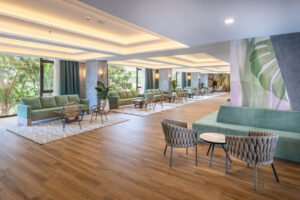 It wasn’t all lazing about either as each day was packed with activities for every age. We liked the fitness classes and himself was introduced to Pilates for the first time where he got huge relief for his back which has been nagging for ages. I liked the salsa and dance classes that were held each day. For kids the volley ball was popular and of course the pool volley ball seemed to be a focal point everyday at 4pm. We played bowls with other guests on two of the mornings and it is a great way to meet people. At a complex like this you can be as private or as social as you like which suited us well. With entertainment at night and facilities for tennis, volleyball and many other sports it is easy to spend the week just at the hotel but we had decided on a tour of the national park before leaving home. 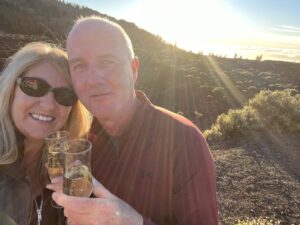 My other-half Terry had booked Tenerife By Night online to make sure that we got to see the Perseides Shower that was scheduled to light up the night skies during the week of our visit. Tenerife is the ideal destination for observing space as the Spanish authorities passed a law to prevent airlines flying over Tenerife to protect the conditions for star gazing. We were picked up at our hotel at 3pm and didn’t realise that we were going to see much more than the stars.

The snake like drive through lava terrains from dense forest, thick with cloud, to high desert prepared us for something special. We stopped at the small town of Vilaflor for a coffee and then the air thinned as we rose higher to the sparse lunar landscape used in the iconic film one million BC that starred Raquel Welch. Mount Teide had special spiritual significance for the Guanches, the aboriginal people of Tenerife, who considered the volcano to be the Gates of Hell. In 2007 the area was declared a UNESCO world heritage site and for good reason as it supports 14 plants unique to this site and many more varieties. 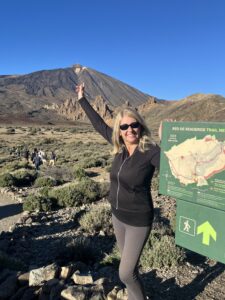 We made stops at the famous Roque Cinchado and were given time to sip champagne as the sun set slowly above the clouds below us. This was followed by a traditional dinner at Papillion, the highest restaurant on the island and then it was time to see the stars. The observatories on Mount Teide were built for research purposes and have made amazing discoveries. At 2390 meters above sea level the solar telescope recorded that the sun has its own frequency and is beating like a heart once every five minutes. 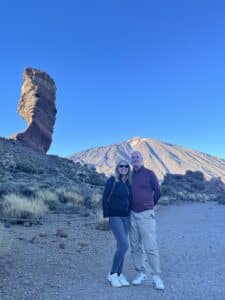 Our guide Jose set up three huge telescopes when pitch darkness descended and it was time to start discovering. He shone a laser bean to point out the constellations of Ursa Major and was a mine of mythological information as he told the stories of Cassiopeia and Andromeda. We each were shown through the telescopes Jupiter, with its surrounding moons, and the red earth of Mars. The Nebula was next and to be honest the sky was so clear we could see that without help.  To look out into a clear night sky is a truly humbling experience and made us appreciate how small we are in the scheme of the universe and how insignificant most of our worries can be. 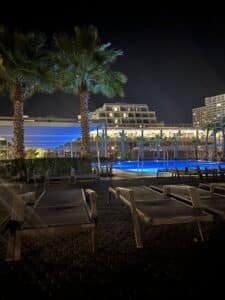 We were back to our hotel by 11pm and this time with a glass of Prosecco in hand went down to the hotel gardens to do some more star gazing. To our delight Perseids decided to turn on the illuminations and we counted five shooting stars in less than an hour. Now when I look out on these cold dark evenings at the night sky and Orion hangs over the garage I can’t help but get a warm feeling remembering our Four Star Adventure in Tenerife.

Riu Hotels  the night rate at Hotel Buenavista right now on their web page is: €257,30 www.riu.com

One week at end of February including flight ex Dublin and all inclusive accommodation with Tuiholidays.com €998pps