Art was my first love and as I’ve travelled around the world it remains forefront in my passions. Some cities are known for their treasure troves and scream about their museums to indulge the fine art lover, while others are less obviously so. Philadelphia is one of those places, with an ex-factor for those wanting a mix of the traditional and new sights to indulge in the visual arts. 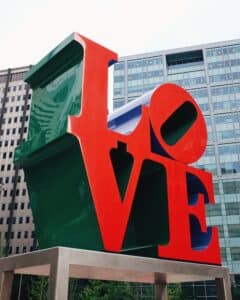 Being an Art Teacher for over thirty years I was more than a little surprised to learn that the Barnes Collection holds the largest Private Collection of Impressionist and Post Impressionist works in the world. Seurats, Van Goghs and Renoirs are tightly packed onto the walls and hung with details and precision in the order that were originally intended. Dr Albert Barnes was a strong supporter of education for all through art and he believed people like art should not be segregated. He rescued many of these works during the Second World War in Europe and it is just as well that he did. The Modigliani Up Close exhibition runs until the end of January 2023 a veritable feast for those who enjoy the Italian artists work. https://www.barnesfoundation.org. Located on Philadelphia’s Parkway Museum District the Barnes Foundaton is close to one of the best photo opportunities for instagrammers at the top of the thoroughfare. Robert Indianna’s ‘Love’ sculpture was installed at the JFK plaza on the Museum Mile in 1975 but is better known today as the Love Park. 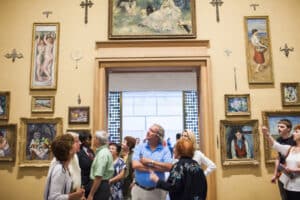 Those of us old enough to have seen the Movie Rocky, have the epic image of Sly Stallone running up the steps of the Museum of Art etched forever in our memory. After mounting the steps the view is panoramic and I stood on the carved footprints of Rocky himself at the top. However I was also intrigued by the incredible collection of historic artefacts that I found inside the museum. From Hoppers to Warhols the museum displays superb fine art spreading across continents and intriguing objects and structures such as the ceremonial teahouse from far afield as Japan. https://philamuseum.org/ 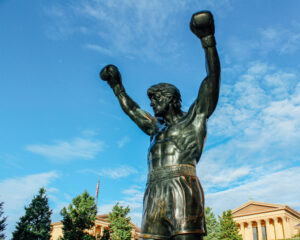 In fact you’ll have difficulty walking the streets without bumping into colourful sculptures that make the open spaces and parks an outdoor art gallery. Philadelphia is decorated with spectacular murals on every street corner and a fun way to explore these is on a Segway Tour, see phillybysegway.com. Boasting over 4,000 murals, the initiative was started to prevent graffiti has turned the city into a living breathing art monument. 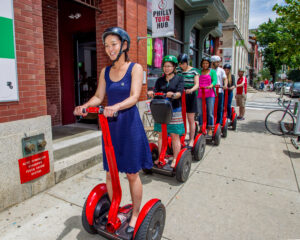 Art comes in many guises in this city and one of its best kept secrets, especially appealing to the boys, is located a short ten minute drive outside the city and only ten minutes from Philadelphia airport. The Simeone Foundation houses over half-a-billion dollars worth of cars from the earliest days of car manufacture right through the peak of motoring in the 20th century. 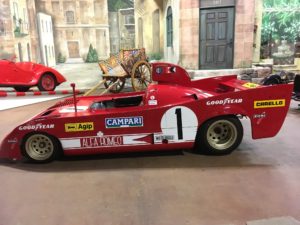 One-off Ferrari’s and winners of the Mille Miglia rub fenders with Bugattis and with an entrance fee of only $13 it’s no wonder that it has been voted best worldwide Vintage Car Museum. It’s an ideal way to put in an afternoon or fill the hours between a long layover flight-connection. simeonemuseum.org 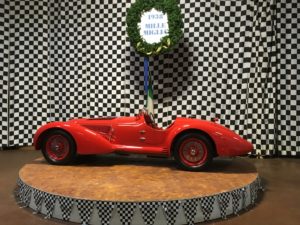 Shopping is another nice surprise in Philadelphia as there’s no added tax on clothing and shoes in the state of Pennsylvania – so the price you see on the tag is the price you pay. As in much of America food is a treat and dining at the market at Reading Terminal, which has been a national monument since 1995, is a great spot to pick up an authentic Philly Cheesesteak. I felt like I had been transported to Paris when I went for brunch to the Parc Brasserie in Rittenhouse Square – one of the city’s classiest neighbourhoods. It’s worth dropping by and sitting outside for some people watching. Enjoy a coffee or be a little decadent and splash out on a Kir Royale. www.parc-restaurant.com 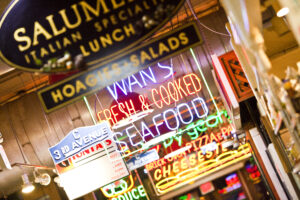 Philadelphia was once the capital of the United States and home to the city’s most famous son – Benjamin Franklin. An all round over-achiever, Franklin was one of the signatories of The Declaration of Independence. He was also a Scientist, Diplomat, Author, Inventor, and the list goes on. Today he features on the front of the $100 bill. His resting place is at Christ Church Burial Ground, close to the house where Betsy Ross lived, sometimes credited as the maker of the original stars and stripes flag. If it’s more history you’d enjoy then The Liberty Bell is on display in an open pavilion and one of the many free things to do in the city. 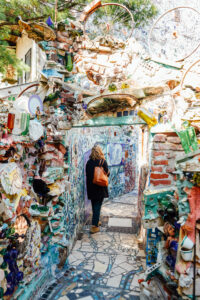 It’s well worth making time to visit the Museum of the American Revolution and home to the original tent used by the country’s first president, George Washington. I followed the displays around from room to room in correct order, and when the tent was revealed at the end I was given quite the surprise but I can’t ruin that by revealing it here. The museum will be appealing for all the family – not just adults. www.amrevmuseum.org 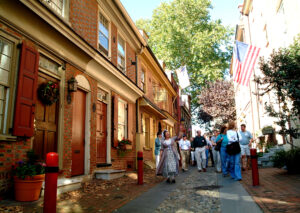 Philadelphia has a charming old town with brownstone buildings on cobbled streets and the finest example of 18th century houses still habited can be found on Elfreth’s Alley. It’s credited with being America’s continuously inhabited oldest street and is less than ten minutes walk from the Irish Memorial. Glenna Goodacre sculpted The Memorial which is a famine ship adorned with characters symbolizing the Irish Diaspora who first came to Philadelphia. It is lovingly cared for by the friends and patrons of the statue and will touch the heart of anyone of Irish descent. As time has moved on so too has Philadelphia and The City of Brotherly Love proves itself to be a bountiful feast for art lovers and those who love shopping – making it a perfect USA destination for a cheeky City Break this autumn.

For more on Philadelphia see www.discoverphl.com

Daily direct Routes from Dublin to Philadelphia with American Airlines and Aer Lingus. 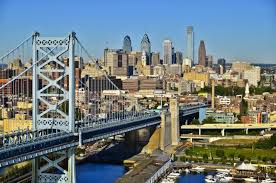 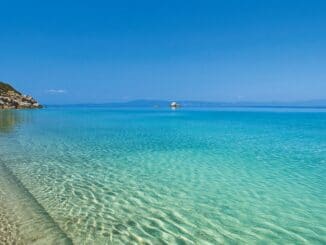 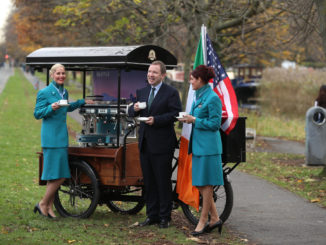