Nowhere offers the best Wurst and tastiest Gluhwein than Germany so this year for our European Christmas Markets I’m in Hamburg with himself and we have 17 markets to choose from. We begin our odyssey at the historic Roncalli Market in the heart of the city under the gaze of the pretty Town Hall. 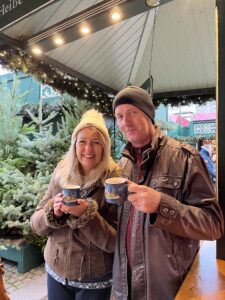 This is the quintessential Christmas market experience – alive with activity from lunch time to midnight and over eighty stalls filled with beautiful handcrafted goods. It may be only 12pm but I’m cupping the hot chocolate laced with baileys and feeling decadent as I sip under a canopy of fairy lights and green. With one eye on the Victorian Merry-go-round, Christmas is back and although I’ve 16 more markets to explore there’s lots more to see in this city of almost two million people. 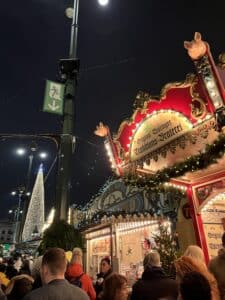 Hamburg is the second biggest port in Europe, set on the immense River Elbe and 60km from the mouth of the Baltic Sea. The maritime heritage is engrained throughout this city that boasts more bridges than Venice. To start we begin at the historic Speicherstadt District, built between 1883 and 1927 it’s filled with Red brick warehouses that once stored cotton, coffee and other commodities. 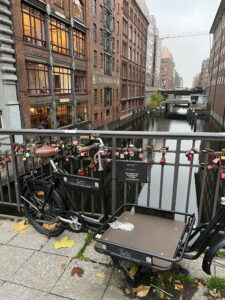 It’s now a bustling centre of culture housing The Maritime Museum, Miniatur Wunderland, and work spaces, apartments and restaurants. In 2017 the strikingly dramatic Elbphilharmonie building was opened on the waterfront. This glass covered concert hall rises from the water like the bow of the steamer ships that used to patrol the harbour. 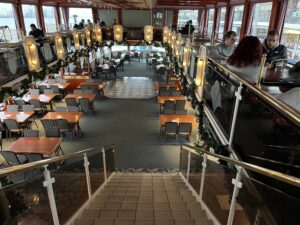 The best way to view it is on the water so we decide to take a one hour tour in one of the enclosed tour boats serviced by www.abicht.cruises – the guide spoke in German but we downloaded the app and heard the tour in English as we sipped on Gluhwein and took in the views of the towering cranes and swanky beaches. Tours depart on the half hour along the promenade of the harbour front and booking comes with a discount if you use the Hamburg Card which includes unlimited travel on the city buses and trains and starts from €10.90. 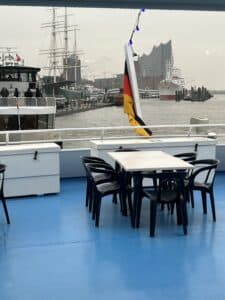 The harbour is where we picked up the speciality of pickled herring in a bread roll known locally as Fischbrötchen and every bakery in Hamburg bakes the delicious Franzbrötchen pastry which is a must try. Choice in eateries is huge in Hamburg and although we were distracted with the goodies at the Christmas markets we found two gems in the St Pauli district. 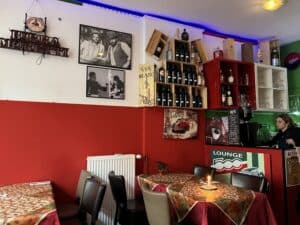 On Paul Roosen Street the XO restaurant seafood bar is excellent and we had a super cheap lunch at the family run Trattoria 500 on the same street. Christmas is oozing from every corner of Hamburg in December and the St Pauli district has its own market called Santa Pauli. Here amongst the naughty baubles and sexy lingerie you will find not-typical Christmas goodies, sold by equally fun loving characters – some in nun’s costumes. This market isn’t exactly adult only but with live bands and a pole centre stage it’s a must visit for some alternative Christmas fun in the evenings! 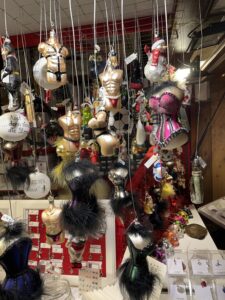 This part of the city is dominated by the Reeperbahn where once rowdy sailors filled the bars the new generation comes here to visit the playhouses and theatres that make this part of town a German Broadway. We found a fabulous bar off the main thoroughfare in Zum Silbersack and stepped back in time as we entered a traditional pub filled with smoky air. 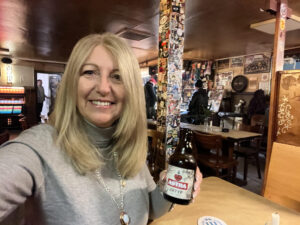 From the sounds on the jukebox of Der Kommisar by Falco to Nina’s 99 red balloons it’s a trip down memory lane for Generation X and Baby Boomers. At weekends you won’t get a seat but you can expect to see locals dance on the tables. Sebastian the barman sent us down some schnapps after seeing us there for a second night. Bring your cash and expect a warm German welcome because many of the clients have shares in the bar – it was bought by a group of neighbours so it wouldn’t be pulled down after the owner of fifty years passed away. 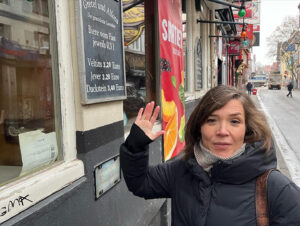 For Beatles fans the Reeperbahn is where the story of the Fab Four begins. We arranged to meet Stefani Hemple who started the original Beatles tour eighteen years ago and is an aficionado of the bands time spent here in 1960. We met at Beatles Platz by the steel framed sculpture of the group who were then a band of five. 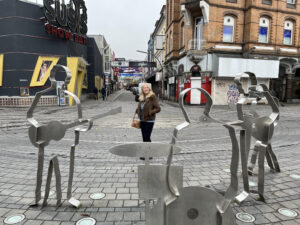 It’s in Hamburg that the fifth Beatle Stuart Sutcliffe met the love of his life Astrid Kirchherr and she in turn gave them the look which set them apart from other bands of the time – it’s also where he sadly passed away. Stefani explained so much that I hadn’t heard before about the group – how Ringo was already part of a successful band that headlined at the Kaiser Keller where the Beatles played support. Something special about this tour is the unique way Stefani played some of the bands tunes on her ukulele as she took us through the bars where they played for bawdy sailors. We finished up at the doorway used by John Lennon on his solo album after the group split up. To book this fascinating tour see www.hempels-musictour.de/ 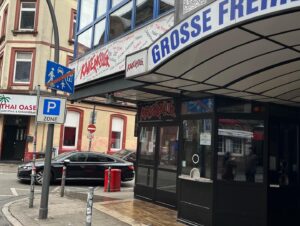 The city’s Jungfernsteig promenade is home to another magical market with white tents, white lights and one of the oldest ferris wheels in Germany. 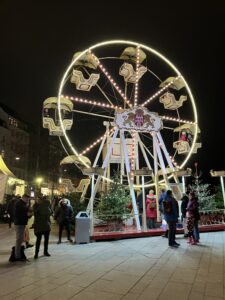 The old town and new town meet in this festive centre with spectacular views over Lake Alster on one side and the giant Christmas tree on the other. The tree shines over the pretty covered boulevards filled with unique shopping and dining experiences and has to be the best spot to soak up the Christmas Season anywhere in the world. 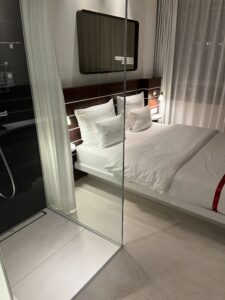 Hamburg is a city of contrast where the old and new merge in a seamless flow of industrial modern and rustic traditional that just works. We stayed in the uber modern Ruby Lotti Hotel set in a great location next to the Stadthausbrucke train station. The bar and reception are one and guests are asked to use the self service screens at the bar while a printed room key is dispensed from the counter. Our room was compact but missing nothing and stylishly modern with an unusual take on the en-suite being part of the room with a closed WC. In a city like Hamburg there’s so much to do we didn’t linger in the hotel but it did display all the elements of sustainable hospitality. We were offered a free cocktail if we waivered a room clean with fresh towels which was tempting and we were doing our bit for the environment too. Quite the contrast to our favourite pub but this is why the city works. Hamburg has something for everyone and all tastes so don’t try fit it all in on a weekend as it’s best to leave something for the next time.

Michelle was guest of www.germany.travel the German tourist board

Order and pay for the Hamburg Card online www.hamburg.com/