I’ve a penchant for museums and was in my element when I recently explored a cluster of museum gems under the umbrella of Waterford Treasures. They are all conveniently located in Waterford’s Viking Triangle and parking was painless and close at the Clock Tower car park in the centre of the city. My first stop was to meet Museums Director Eamonn McEneaney at the newly opened and intriguing Irish Museum of Time in Greyfriar’s Church. The museum displays one hundred years of clock collection by David Boles and Colman Curran and is nestled in amongst the Medieval Museum and the newly opened Museum of Silver. 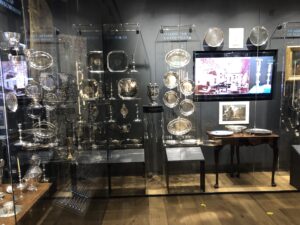 The Irish Museum of Time

This is a tranquil space even though the chimes of some items can be heard at the o’clock and some clever holograms introduced us to the craft of horology at the beginning of the displays. The array of clocks have a breathtaking range of style, age and design. Surprisingly one of the most unique and expensive is from 1938 and was crafted in Dublin. Indeed it was good to learn that the skill and excellence seen in Irish clocks from every century was amongst the highest standard in the world. And some date further back than the Battle of the Boyne. 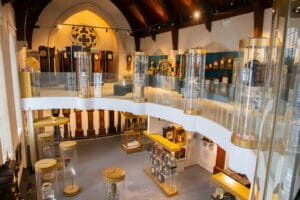 Clocks and watches from all corners of the world with unique stories of the places where they were made. If you need to take a pee while rummaging around the museum then you are in for a treat as the walls of the toilets are decorated with quotes and fun clocks encased into the walls to help you pass the time! 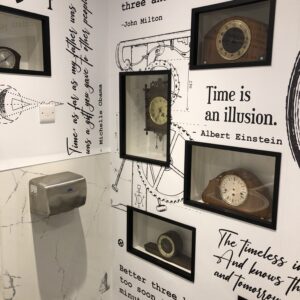 The Medieval Museum was next on our list and it told the history of Waterford with stunning textiles and artefacts from the middle ages. Henry VIII’s Cap of Maintenance is encased behind glass and thought to be the monarch’s only surviving item of clothing. 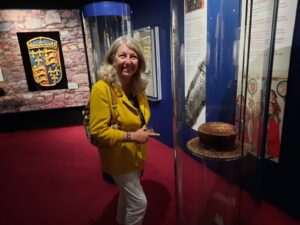 But the real treat for any textile lover, myself included, is the display of wonderful religious vestments designed in Italy and hand crafted originally in Bruges before making their way to Waterford. The garments survived the Penal Times and were buried for several decades making it even more remarkable that their story can be enjoyed today with the fabrics still very much intact. The video film about their survival will leave you amazed. 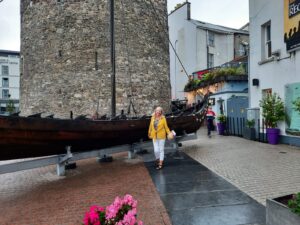 A real treat for young and old alike is the King of The Vikings, the world’s first virtual reality Viking Experience. For the Downtown Abbey fan the Museum of Silver will take you back to a more refined time. To book tickets for all of the museums visit www.waterfordtreasures.com

This abundance of culture, history and family fun was only a short stroll from our base at the Granville Hotel. The hotel was the birth place of the revolutionary and military leader Thomas Francis Meagher who went on to form the famous Irish Brigade in the American Civil War. He is also credited with creating the current Irish flag in 1848 which is a fusion of the catholic and protestant colours of green and orange united by the symbolic white of peace. 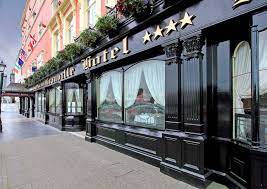 This landmark property is part of Original Irish Hotels Group and currently celebrating forty years in the capable hands of the Cusack family who have created a hotel that smacks of a time gone by and a cuisine that has kept up with modern culinary tastes. My plant based breakfast was filled with mouth watering Mexican flavours served with avocado on a traditional Waterford Bap. Our evening meal was a tantalising burst of Mediterranean flavours served over deliciously fresh hake. An overnight stay at the Granville Hotel including dinner in the AA Rosette Bianconi Restaurant, named after the founder of public transportation in Ireland Charles Bianconi, has an opening price €204 total stay for two people. To book this offer call 012958900 www.originalirishhotels.com/offers

Before leaving Waterford I swung by the Theatre Royal for the launch of the Imagine Arts Festival which will turn twenty this year and will be running from October 15th to October 24th 2021. The festival’s visual art listing will feature an exhibition by renowned artist John Shinnors at Goma Gallery. Theatre events include Spliced a Timmy Creed Production, Sylvan from Tinderbox Theatre Company, and Marbleface, which was the winner of last year’s Imaginings competition which was hosted to identify and commission new artworks. Four headline music events include gigs with Dublin-based singer-songwriter Aoife Nessa Frances and singer/songwriter Junior Brother. It’s great to see live events starting up again and I’m sure the Imagine Festival will be a catalyst to help live entertainment rise like a phoenix from the ashes of an industry which has taken a huge battering over the last eighteen months. For more see www.Imagineartsfestival.com