Valencia is home to culinary excellence, mind boggling architecture and every year it hosts the spectacular Fallas Festival which is an explosion of culture, traditions and art. Not satisfied with such accolades it was recently voted the healthiest city in the world for the second year in a row by UK’s Money magazine.

There’s good reason why the cuisine is exquisite – the surrounding communities produce fine selections of fruit, vegetables and rice. Valencia is home to Spain’s national dish Paella, which originally was eaten at lunch time by the farmers who produce this superb food. The leisurely lunch is taken very seriously in Valencia and finding new eateries is part of the pleasure as I pottered around the cobbled streets of the old town and wound up at the Mercado Central to see the produce first hand. I stayed in the old town too at the SH Ingles Hotel which is a trendy welcoming boutique hotel in a great location. www.inglesboutique.com/en 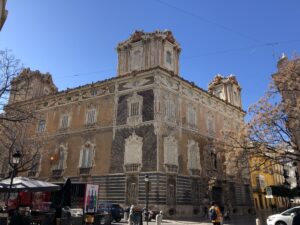 Each district in the city offers different attractions. I stumbled across Canalla Bistro in Ruzafa, which offered unusual twists on pork dishes with more than one vegetarian option on the menu. Afterwards the streets were filled with a lively Friday night market offering Food stalls, craftwork and people enjoying their night in festive atmosphere.

Not satisfied with being the best at food , Valencia boasts being home to the original Holy Grail – the chalice used by Jesus Christ at the last supper. It sits in a golden case in the Cathedral of Valencia and was brought to the city through France – outside the square is getting a facelift but the spacious Plaza de la Virgin is a haven to sit and people watch. The Font del Turia which illuminates the square in the evenings is homage to the River that was cleverly diverted from running through the city in the 1970s. 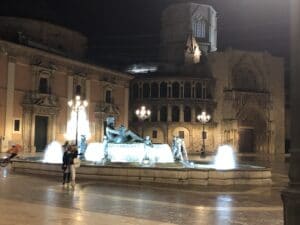 This brave act not only solved the problem of constant flooding in the city but now provides an idyllic park called the Turia Gardens and runs through the spine of the city centre for nine kilometres. I started my exploration of the Turia Gardens at Serrano Gate which is one of twelve gates built in 14th century that formed part of the ancient city walls. This imposing landmark is one of the best preserved monuments in Valencia and was used as a prison for nobility from the 15th century. It’s free to visit today with spectacular views of the city. 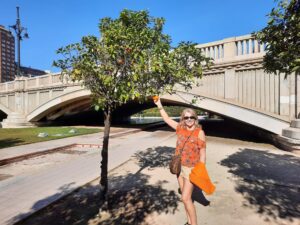 Walking the Turia Gardens expect to see football pitches and skateboard parks dotted with water features and trees laden with oranges. Being a healthy city the cycle tracks make biking a great way to take in the views and get around easily. Hanging over the park is a cornucopia of bridges from various dates in the city’s history culminating at the Serreria Bridge on the eastern edge of the City of Arts and Sciences. 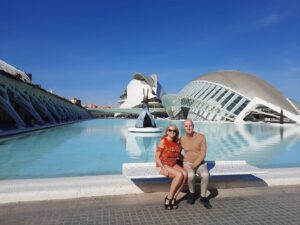 This marvellous futuristic creation was designed by the city’s most famous son, world renowned architect Santiago Calatrava. The complex includes the city’s opera house and science block with open spaces perfect for lounging. The Oceanografic houses Europe’s largest Aquarium and will thrill all those fascinated by the ocean – especially children. I stopped by for a spot of sunbathing with a cool beer in hand at the Café des Artes. It’s the sort of place where you can relax and enjoy the sunshine and not feel like you’re in a city.

The Museum of Fallas de Valencia is only a short stroll away so I had to check out the home to the nintos (sculptures and satirical effigies) which have been saved from the flames at the various Fallas since the 1934. In March Valencia will be ablaze with dancers, processions and fireworks as the nintos from the various neighbourhoods meet their end under a sea of fire.

I’m only sorry that I won’t be there but this festival runs for several weeks and I was fortunate enough to see the amazing display on 4th February that heralded the start of this monumental festival. All the nintos taking part in this festival have been on display since then and the two who were pardoned and will end up in the Fallas Museum for posterity. 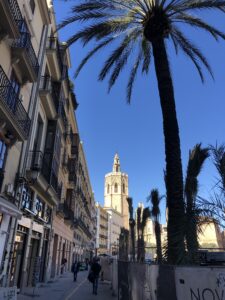 If I haven’t already tempted you to visit Valencia this city has another ace up its sleeve. Being on the coast you can bask in the Mediterranean sunshine on the city’s beach at Playa de Las Arenas. The coastline offers hotels and lots of lovely restaurants too. Valencia is probably Spain’s best kept secret but with daily direct flights from Dublin it’s not going to be a secret for long and Ryanair starts a direct route from Cork to Valencia this summer.

While visiting Valencia I used the Valencia Tourist card which includes use of public transport and discounts to many of the city sites but many of the galleries and museums are free. www.valenciatouristcard.com 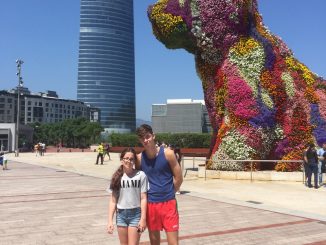 Bilbao was Wow with the Kids! 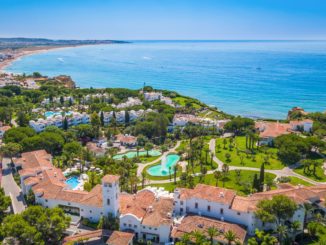 Body Beautiful for the New Year on VMTVs Elaine 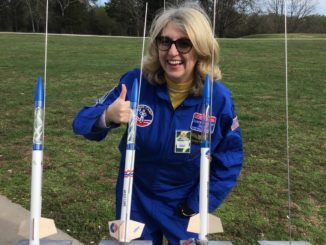